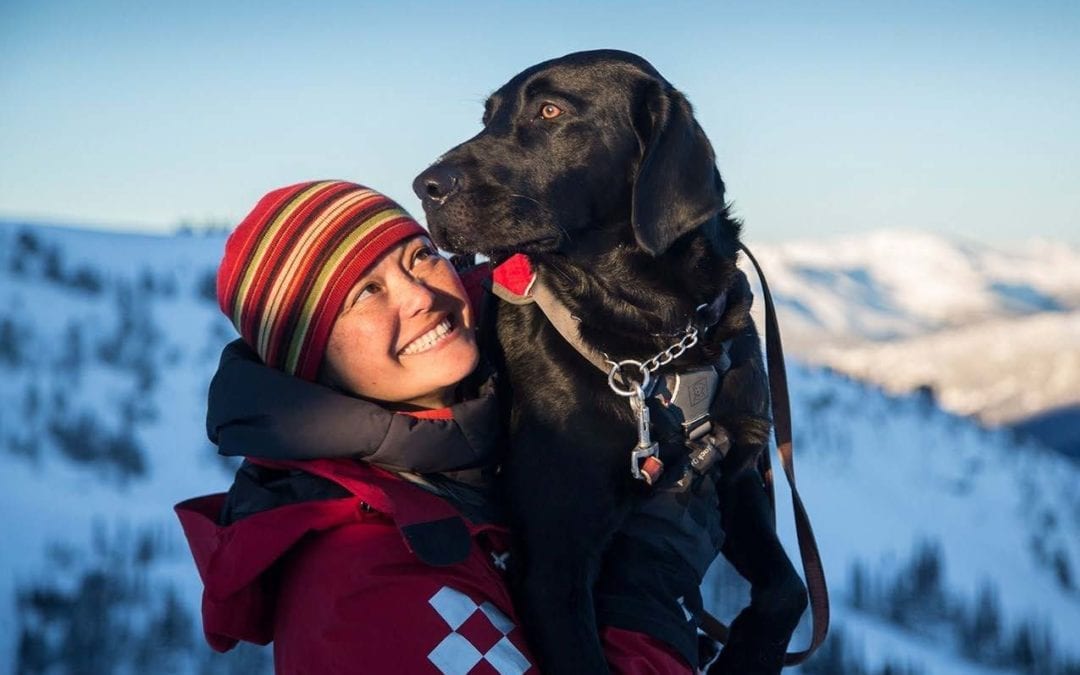 Favourite thing: Running around in the snow barking

Favourite thing: Being in the snowy mountains on skis with my dogs, friends and family 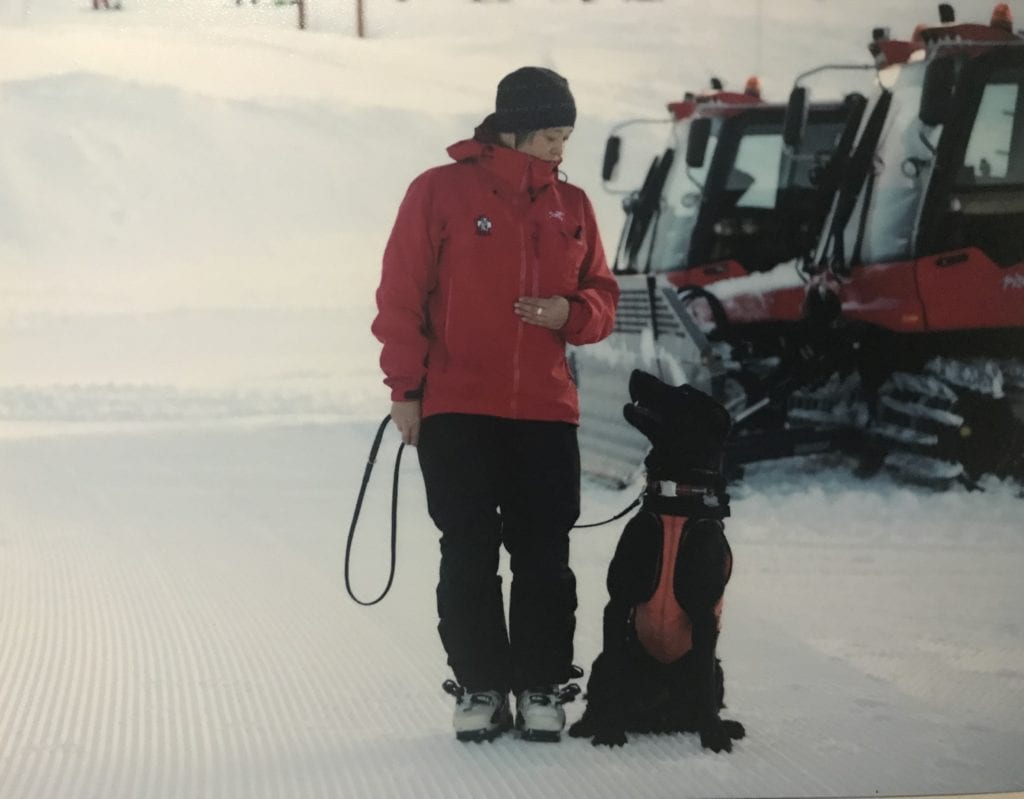 Never Too Late to Go For Your Dreams

Janet Rygnestad says she came to the world of SAR dogs later than most. The spry 53 year old looks younger than her years as she talks to us on Zoom from her home office on Vancouver Island. Rory, her large black lab is a bundle of ‘ready to go’ action-dog energy, works fervently on a soothing blanket nearby.

At 53, in a field when many handlers have had a few dogs and are maybe even aging out of the work, Rory is Janet’s first Search and Rescue dog, and she doesn’t intend for him to be her last.

“I came this late. I worked on a ski hill in my 20’s, and I always wanted to patrol, but I got married and had a family, and a stable career etc…”

It was Janet’s daughter that finally gave her the nudge to chase her own dreams.

If At First You Don’t Succeed.

Despite being in her mid 40’s at the time, Janet took 8 months off work and began the training that led her to being in Search and Rescue. She knew she wanted a SAR dog, but the road wasn’t that easy.

“My first dog Juno was a Chesapeake Bay Retriever but she failed out when she was a year and a half old. She was too skittish. I cried so hard, because you put your heart and soul into training these dogs.

A SAR dog is a very special animal, and you don’t always know as a puppy if they will have the quality they need. A SAR dog needs to be very high drive, but also be predictable. When a dog fails the SAR training it’s called “washing the dog”. Janet’s first dog passed her puppy training, but part way through the intermediate assessment she washed out for being too skittish.

“It was sweet, because there were these two very burlly very serious RCMP handlers who had to pull me aside and tell me. They came and said: You know, we just are going to have to wash Juno, we can’t have an eighty-percenter. You don’t want an eighty-percenter looking for your child. I was trying not to cry, and trying to be professional. I had known in my heart she was going to be washed ”

Janet felt like her dream to be in SAR was over at that point, and all her training had been for nothing, but fate stepped in.

“The best thing that happened is that one of the experienced handlers came to me and gave me a great big hug, and then she said, ‘You are a good handler and you need to get another dog and start again’.

And then she asked me if I wanted to re-home Juno. I was surprised. I had always seen dogs as pets that stay with you forever.”

Janet knew that she wouldn’t be able to continue as a SAR handler with two high drive dogs at home, so she gave Juno to her daughter.

“You have to do what’s best for the dog. It’s not about feeling guilty, or what’s best for you. For SAR we specifically ask for high-drive dogs. And it doesn’t work out, and you have this super high drive dog home with you. I tried to take Juno with me at first after I got Rory, but she destroyed a wire kennel because I was out with Rory and not with her. Juno is a super mellow dog now, she’s a total pet, and is perfect for my daughter.

Juno was a learner dog. She taught me the basics. I don’t know if I could have done Rory justice if I’d started with him.

In the SARS community people talk about if you are a Floppy eared dog or pointy ear dog person.

“They have totally different personalities, “ explains Janet. “Not too many people go with both. I’m obviously a floppy eared person.” she said looking fondly at Rory who is a larger sized American Field Lab.

“I call them labrodorks. They tend to be goofy and funny, and work at a bigillian miles an hour. I have to slow Rory down. Shepherds ( less than Maloise), tend to be more slow and methodical, they are different dogs. A little more serious. Rory is a super dorky dog. Funny and happy. That plays against me on the ski hill because people tend not to come up to the handlers with the pointy ears because they think they are scary. I have to tell people all the time not to touch him. Rory is so in tune with me, he won’t respond to touch well. I had to teach the kids to have calm energy when they pet him, because as soon as you goof around with him in the house he gets way too wound up.” What was your most memorable SAR event?

“We had a big one earlier this year in the summer – July. We got called into the mountains on the north island for a mountaineer that had gone missing. This was a very highly experienced mountaineer missing for two weeks. They had teams from all over the island and mainland come out. We were tasked to search a very steep gully filled with snow. At the bottom of the gully, there was a gap, as there was water melting away

Rory ran over to the edge and started barking, and I was so sure that we had found this fellow, that I turned to my navigator, and I asked him if he wanted me to go look but there was nothing. So we continued searching up the gullyas far as we could, and Rory was working the gully, and I was thinking “How is the subject not here?” not here.

We found out weeks later when he was found that the scent was likely being carried by the water underneath the snow pack. And the melting water was flowing down, and it hit the flat spot where the sun had opened up a hole, and it was pooling so that’s where Rory indicated.

It was profound, it made me really question whether I was doing the right thing, because Rory had told me that the body was there and if I’d pressed harder maybe we would have found him sooner. But then I realised that it was a success, because Rory had done his job, indicated on the scent.

I felt really guilty that we hadn’t found him at the time, and I still occasionally struggle with that. You really really want to bring home the person. Alive or deceased you want to bring that family closure.”

“My vet and I tried a million different kinds of kibble, and none of them worked. My undergrad is in microbiology, so I get super sciency about this. And finally my vet said she wasn’t normally one to suggest raw because it’s being too “uncontrolled” but that we should give it a try. I switched Juno onto raw, and her issues cleared up. It seemed like it made sense to just do the same with Rory.”

Jen Colture, suggested Pets Go Raw to Janet. She loves the fact that she doesn’t have to overthink the diet when she uses Pets Go Raw.

“They have each meal perfectly balanced already. Rory is shiny and musculature is good, and he’s got loads of energy. I like how far commercial raw foods have come, when I started I was making it myself, I was weighing it out, and sourcing out different proteins. Pets Go Raw just makes it so easy, I just cut off a puck and go.”

On Raw And Kibble Mixed

Janet says that mixing part kibble and part raw is not bad.

“My dog is on both kibble and raw. The reason is it’s easier when we are travelling. I keep kibble in my pack just in case we get stuck in the mountains on a search. I tried to use dehydrated meat, but it just takes too long to hydrate. For Rory, he has a really good digestive system, I like the idea that he is used to both.

Oh and one of the best things about feeding your dog raw? “Raw food poop. It’s small and easy to clean up, because their bodies use far more of it.”

What’s Next For Janet And Rory?

Janet loves working in SAR and with a SAR dog, and has plans to get another puppy in a few years.

“ We are in the sweet spot age-wise. You start training your dogs right when you get them, when they are puppies. Then it takes about two years to get to the validation point, and then the sweet spot is 4-6 years old. The dogs have settled by then. Because Rory is not full time on the ski hill, he will probably work till he’s ten.” And that’s just fine with Janet.

I have a strong sense of self as a woman in my 50’s and that’s allowed me to do all these other things. I have a super supportive partner. I was half way through thanksgiving and we’ve had a callout, he always looks at me and says: are you going? And then he always offers to make me tea, or grab me food. I couldn’t do this without him. 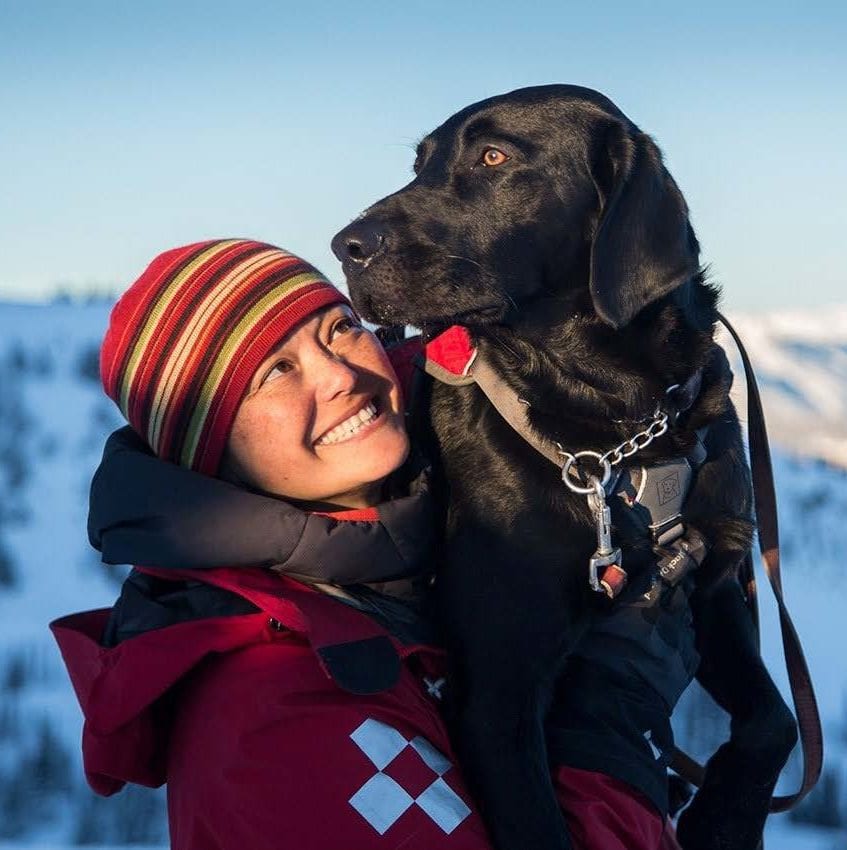