Deep in the heart of the Rocky Mountains, the Yamnuska Wolfdog Sanctuary is the only wolfdog rescue in Canada, and one of the largest in North America. It’s one of the only rescues that balances educational programs with a successful adoption program. Pets Go Raw have been proud sponsors of Yamnuska for just over a year. We managed to get on the phone with their very busy manager, Alyx Harris, to talk about the challenges and beauty of wolfdogs blends, and the need for both responsible owners, and sanctuaries. 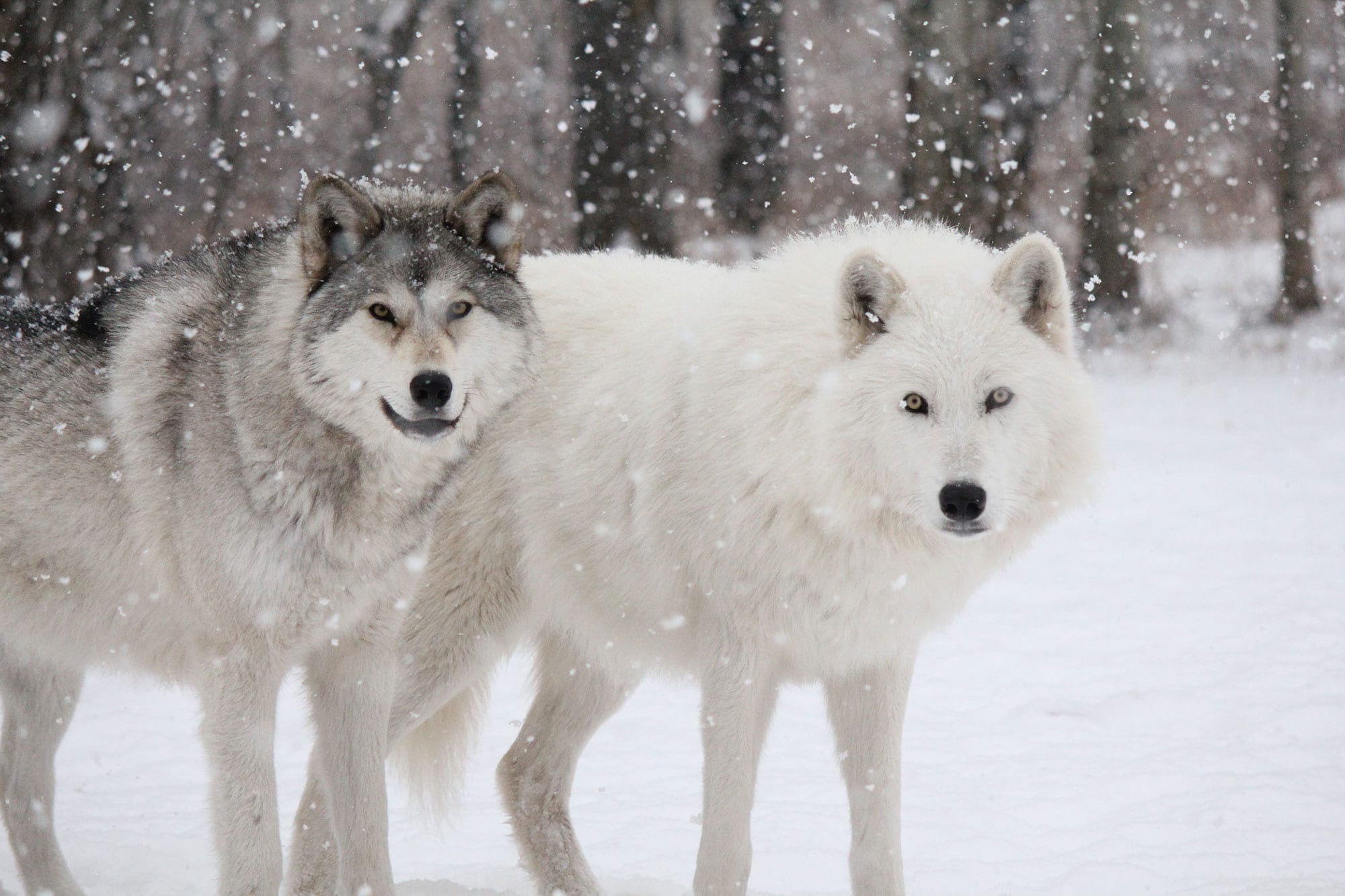 Why “wolf dogs”, where did this mixture come from?

Some of the first wolf dogs were likely the result of fur farms for their pelts. As that started to die down, you had humans just experimenting breeding domestic dogs to one of these captive wolves. Wolf dogs today are bred as exotic pets.

Breeders take an exotic wild animal, and mix it with a dog thinking they will get the best worlds, where in reality, you get the worst of both worlds: dogs that are afraid of humans.

Wolves are naturally fearful of humans, we are their top predator. They really don’t have anything else that hunts them. They’ve learned to be very fearful of us. If we think about a working dog, we just want them to please humans. Working dogs break down into three categories: hunting, service and guard dogs.

Wolves are great at hunting, but they aren’t great at sharing. Wolves are naturally resource guarders. They aren’t going to share what they caught with you.

Trying to use wolves as a service dog…when they are fearful of humans. They are going to have a hard time

Then we come to guard dogs. A lot of people think wolf crosses will make a great guard dog: the big bad wolf. But wolves instinctually have a flight response. They are afraid of humans. In a guarding situation, they would run away, and let anyone into your house. They aren’t going to stick around and guard you, or your possessions.

Most wolf dogs don’t make very good pets, usually only low content wolf dogs are suitable to be companion animals. Mid-high content will be too wolf-like, and need a different lifestyle.

Higher content wolf dogs need an enclosure; they won’t be companions. Breeders make it sound cool, but people aren’t educated about the challenges, and as that six month age happens, and the wolf behaviour kicks in, people give them up. Some people try to make it work longer than that. If a low content wolf dog is surrendered to a shelter, they are almost always euthanized. That’s why we started this rescue, because some of those lower content wolf dogs can be put in a home. A lot of the higher content wolf dogs are not suitable to be rehomed.

Do wolves and dogs mix together in the wild?

Wolf and dogs aren’t the same animal. They don’t really speak the same language. For example, wolves practice more of a hierarchy. Dogs coexist. There isn’t an alpha dog (despite what many trainers say). Dogs do not practice hierarchy. There can be dominant dogs, but it’s not structured the way it is with wolves. You can run into issues with that if you have a higher content wolf dog wanting structure, and a lower content dog not understanding how that works.

At our sanctuary we typically only ever have two wolf dogs per pen: a male and a female. The reason why it’s male and female, in the wild is you have an alpha male and alpha female. They are mom and dad. They are the parents.The rest of the pack is their offspring. There are some exceptions if you get a puppy. You might be able to add that puppy to an existing pack, but we very rarely get puppies, usually the six month and older phase.

Wolf dogs are difficult because they are territorial. Once you have one male and one female in an enclosure you are at capacity. And they usually have to have similar wolf content, or else you can have that communication issue. 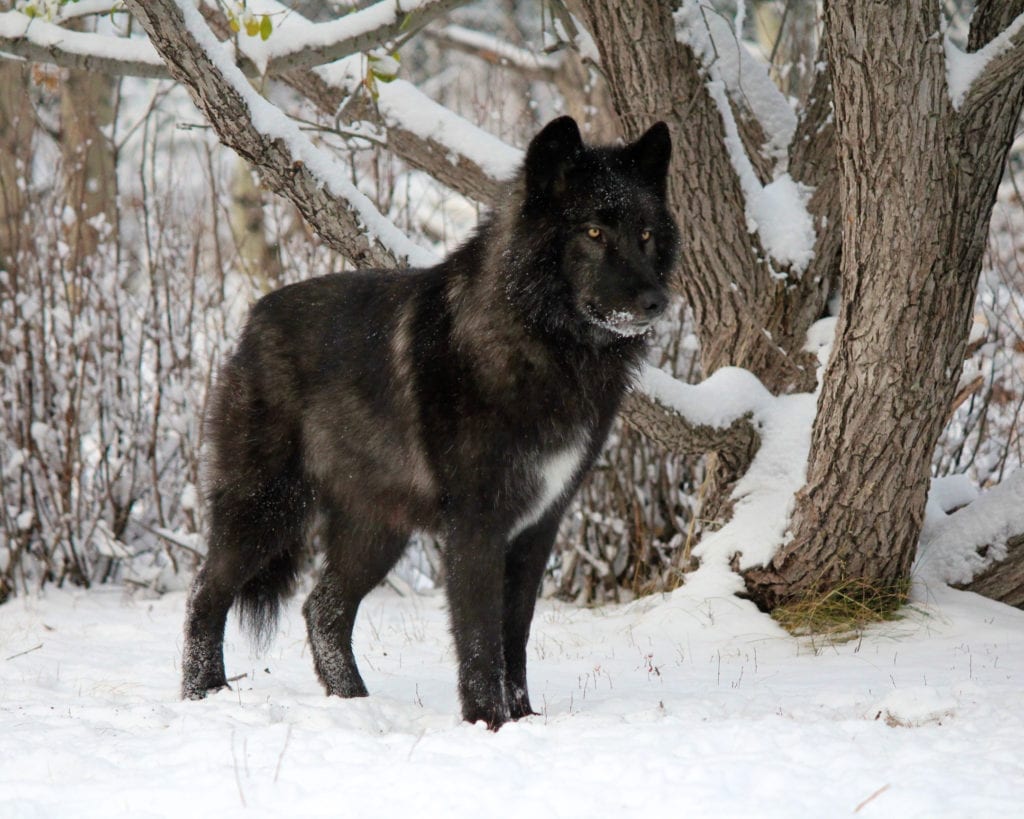 What does someone who wants to adopt a wolf dog need to understand?

We don’t do a ton of adoptions, because we are not taking in too many wolfdogs right now. Most of the wolf dogs people think they have actually turn out to have very little wolf or no wolf in them at all. We really only adopt out low content wolf dogs, and still they have high needs: they often need containment, they will dig and escape. You can’t keep them in crates. They are high energy animals that need a safe place to expel energy. They can have a tendency for a high prey drive ( not good if you have other small children or animals), and/or fearfulness of other humans, and not always great with other dogs.

Then there’s Winter wolf syndrome. Male wolves get extra hormonal in the wintertime, because that’s when they actually breed, they only breed once per year in the winter. Usually it will come into his fertility and it will last about a month, breed usually in February. Different extremes of that in wolf dogs.

They are a little bit crankier. Not necessarily aggressive, but sensitive.

Finally, you have to understand that you can’t force a wolf dog to do something. If he/she doesn’t want him to go into an enclosure, you can’t drag them. Depending on the situation, if you start dragging a wolf dog, you are going to get growling and fearful behavior. They aren’t great on a leash; when they are on a leash you get survival behaviour. Also they often have some same sex aggression. 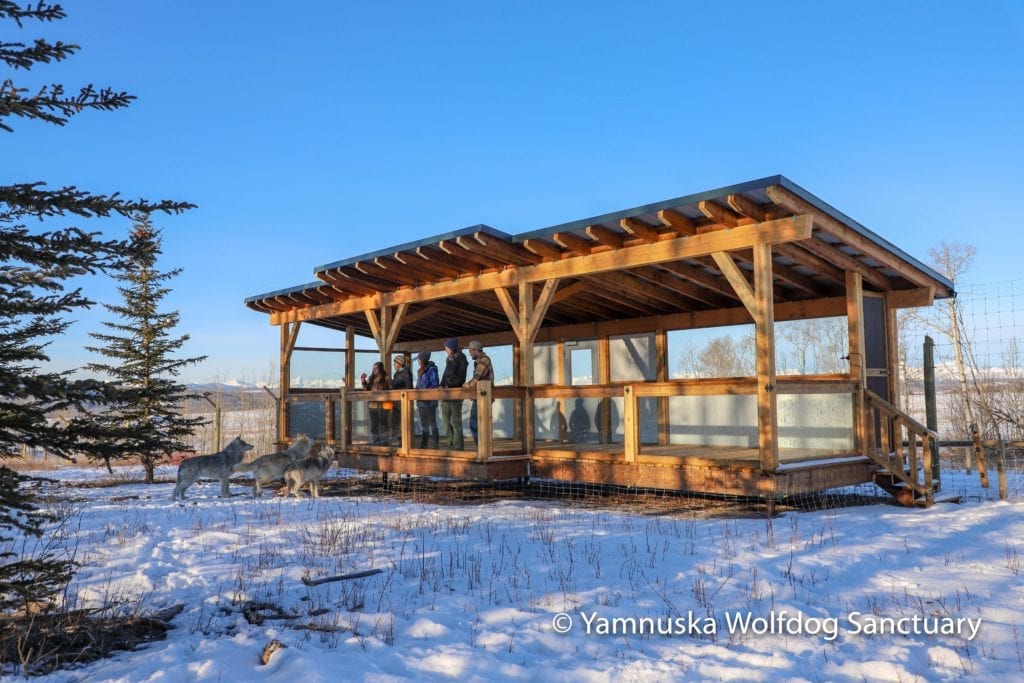 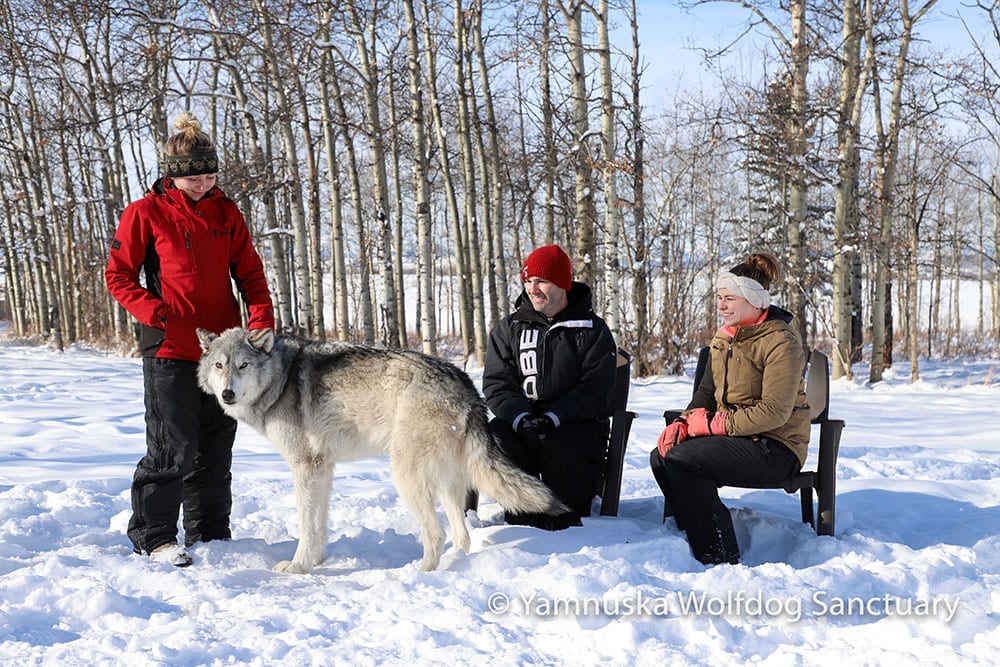 What about diet for wolf dogs?

Wolf dogs do best on a raw based diet. The more wolf, the more likely they won’t be able to process a kibble based diet. Usually if you are giving a wolf dog (even lower content) anything but raw, they just end up having a lot of diarrhea, and digestive issues. It doesn’t seem to fit well in their digestive systems.

Wolves tend not to eat as much in the summer. Between 2-6 lbs per day. We have some higher content wolf dogs, and they will do some natural fasting. A wolf in the wild won’t eat every day, wolves will go up to about 2 weeks without food. It’s only about a 10-20% success rate for hunting. They would typically take down an elk, that’s feeding the whole pack, and they will divvy that up.

When it comes to our higher content wolf dogs, they don’t tend to put on weight very easily. The way that a wolf is built, they are lean, with longer legs, and a higher life expectancy because of it. They will live to roughly 16-18 years old. A large breed dog will be significantly less because of joint issues. Their metabolisms are higher than the average dog, so they can eat more when they eat.

Dogs are built to have much bigger bodies and shorter legs. An average weight for a male grey wolf is 100-130 pounds. A dog of the same height will be 150-200 pounds. A grey wolf is about 32 inches at the shoulder.
Also wolf dogs can be very picky, and get sick of eating the same thing. We were very lucky to develop a relationship with Pets Go Raw. They have been so wonderful to us. Their generosity and helping us out to make sure the wolf dogs can get the diet they need. There are lots of different raw dog foods out there, but the service and generosity of Pets Go Raw is amazing.

What is your favourite wolf dog?

Tough question, we can’t have favourites, but there is one wolfdog here at the sanctuary, TK. He’s not very nice to other people, he’s very particular, and he’s one of our most challenging. But for whatever reason TK and I have an unbelievable relationship: he wags his tail when I come around, and licks my face. I’m the only person he shows that relationship too, so he’s pretty near to my heart because he let me in. 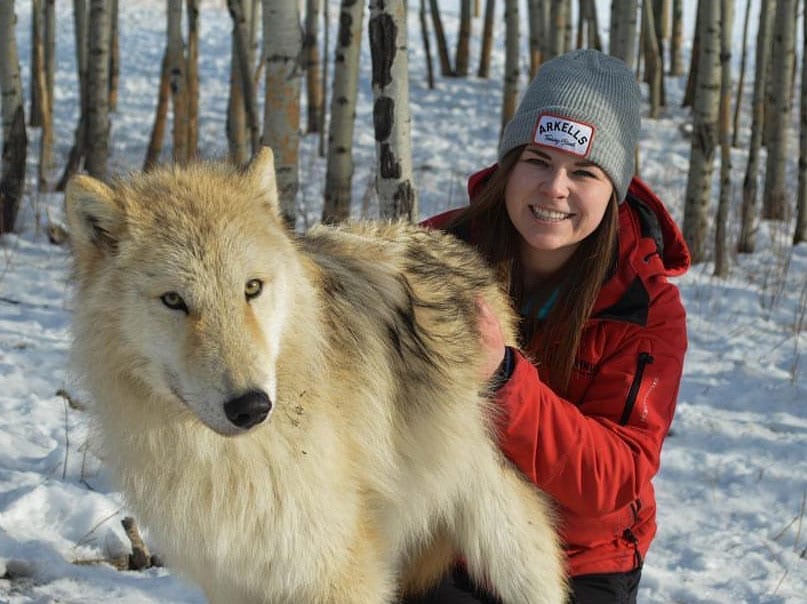 Would you ever adopt a wolf dog?

Adopting a wolf dog, I don’t think I ever would. Seeing the commitment that a wolf dog takes… I am very lucky to get to hang out and get that experience by working at the sanctuary. It’s not on my list of things to do.